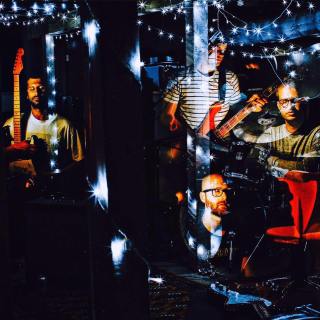 It’s no secret that the Pacific Northwest is a mystical place brimming with rolling mountain ranges, lush forests, and meandering rivers. It inspires a collective ethos that draws people from all over the world and influences a rich and diverse culture. All of this enables Portland to offer the ideal nourishment for budding and rooted creatives alike, most of which take this persona to heart. Wearing it proudly on their sleeves, folk-surf-psych band Fir brandishes Cascadia’s archetypal flag symbol as their name, paying homage to the region’s esoteric musings.

They’ve earned the title, as they share multiple commonalities with their adopted home city. Much like Portland, Fir is a classic old soul, but not without a strong sense of youthful enthusiasm. Their style is difficult to define; having blended a myriad of eclectic sounds from an application of exhaustive musical exploration. And, in proper Portland affinity, they know how to make you feel like you’ve been transported to a world outside of your own, fully immersed in a moment within their music.

I had the opportunity to meet with Fir a couple weeks ago before their show at Turn Turn Turn in NE Portland. We talked about navigating the Portland music environment, learning from antecedent influences, and making a name for themselves in an increasingly distracted music world.

Responses have been edited for length and clarity

There are a lot of Pacific Northwest influences in your material. From images you post, to the video for “1,000 Acres,” and of course, the band name. How would you say that Portland has influenced your music?

Victor Gennaro: It’s so unbelievably beautiful here, everything about this place is beautiful. The people, the beer, the food, the countryside, and I think that it allows for a lot of creativity because it’s such a healthy mental space to live in.

Pete Abraham: I think I have a lot of PNW influences because prior to moving to Oregon ten years ago, I didn’t play guitar. I taught myself to play out here, and spent time just going to shows and seeing local bands. I did a lot of fishing with a friend and got to be outdoors at the river, and being meditative in nature – things like that all influenced my guitar playing.

Jake Jarvis: I think bass-wise, I like this new thing in Portland where it’s cool to be ‘old school met with the new school.’ And all my bass lines are pretty old style, I would say. Pete plays new style of guitar, Evan’s playing in a new style as a drummer, and they can play anything. I just like that vibe.

Evan Smoker: Well, I’m obsessed with Nirvana (laughs). That’s actually the reason why we formed the band, we were going to be a Nirvana cover band. We were gonna’ call ourselves Serve the Servant, or Out Utero.

What’s your process for writing songs?

Victor: I think our primary songwriting process is that someone comes to the group with a core idea and then through jamming on it, a new thing starts to begin. Then we just let whatever’s there start to evolve as the other members start to put their parts together.

Pete: It’s a very democratic process. I would say that between all of us, we’re backlogged with a lot of songs that we’ve written throughout time. We’ve reworked them and really made them our own. And now it feels like we’re in a position where any given song isn’t necessarily done from a ‘verse – chorus – verse’ or lyrical position. It’s just been really fun to come up with this thing and let that democratic process happen. 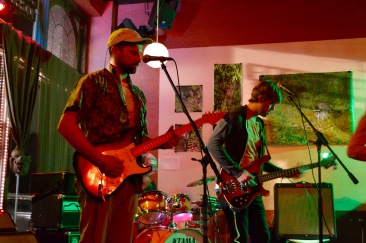 Victor: Oh yeah, for sure. The guys we’re playing with tonight, New Body Electric, they’re super rad and another project that Pete’s in, Olivia Awbrey is super rad. We’ve got some friends in other bands like Soft Kill that give us some advice and information. We’re always open to meeting new people and putting concert bills together. Oh and Nick Caceres is great too.

Pete: Right now Jake does all our recording, and it’s been great getting Nick on board. We’re going to be his backing band for the record he’s coming out with soon.

You’ve posted some videos recording on tape. With how advanced music technology is these days, what has influenced you to want to record in a more traditional style?

Jake: When I started out [recording], I decided I could go digital or go analog – I didn’t have enough money to learn both. I play with this older guy who used to play in the San Francisco 60’s scene, and he had a bunch of tape machines and analog gear. He asked if I wanted it, and then I spent probably a good three months just learning everything I could. I would watch Youtube videos of people I admire like Geoff Emerick (who just died, very sadly). Alan Parsons, people like that. I just learned how to do it, and it made my brain hurt. It’s a weird process – you can’t just cut and paste. You’ve got 8 tracks to deal with, and if someone messes up you’ve gotta go all the way back to the beginning.

Jake: But it’s way more rewarding. And on tape, it naturally compresses. There are times that we’ll listen back and say, ‘man, I really like what you did there’ and it’s like, ‘I didn’t do anything, I just hit a fader’. The tape did it and made it all shimmery and awesome. It just sounds more clean. 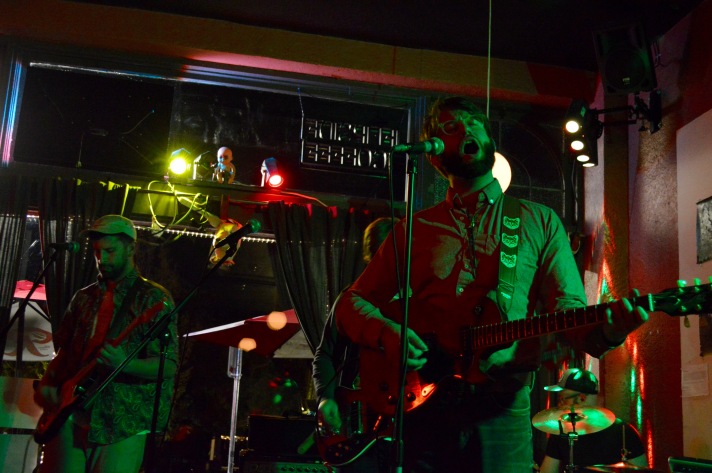 You have some pretty clear influences, like some elements from The Doors and The Growlers. What other groups would you relate your music to, and how do you try to expand upon those sounds?

Jake: I’m obsessed with the Beatles. For the most part, I modeled my bass playing after two players, Paul McCartney and Jack Bruce.

Victor: We listen to a lot of contemporary music too, like the day-wavey kind of sounds – Mac Demarco kind of stuff, and that 80’s revival stuff that’s going on. There’s this thing called Reverberation Radio by the Allah-Lahs, this L.A. band. They make these setlists with like, jazz musicians from East Africa playing with funk bands from South Korea, and then Joni Mitchell. So we listen to things like that and even though we’re not like, a Subsaharan jazz band, we hear new things and think, ‘Oh wow, what if we try something like this on a song’.

Pete: I feel like that plays into the fact that it’s been extremely hard to write a bio for our band. We definitely write ‘love letter’ songs, just like older genres like classic rock. But I also listen to hip hop a lot, and funk music, and Oneohtrix Point Never, like ambient music. It’s kind of like goodwill in a way – you tell it back and leave with something else.

As a developing band in the digital age, what’s it like to develop a career when you’re playing for a consumer base that has become accustomed to not paying for music?

Pete: I think that gives more power to the live show. And having physical merchandise at shows is the way to go these days. Aside from taking a picture, what other memory can you bring back with you? You can’t really argue with the fact that we can get a spindle of CDs for like five bucks and sell those at shows for a reasonable price.

Victor: Another thing is that if you’re going to leave your house and come see our band, we have to be better than Youtube, we have to be better than Netflix. You have to be able to come and have a good time. So sometimes at live shows, maybe we won’t play a song that’s a little more personal. Because it’s Friday night, and people need to be feeling good and be dancing. We’re here to create a shared experience that is hopefully better than just listening to the music at home alone.

Evan: I give a lot of credit to you guys, especially (gestures at band mates). We’re not one of those bands that’s so introspective and turns our backs to the audience. These guys are really funny. Their stage banter is really exciting.

Pete: We’re like to old aunts knitting together (laughs). We have these pontificating conversations. 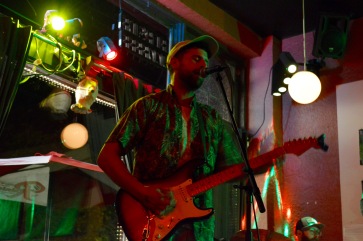 If you had to condense your songs into a single mission statement, what would you want listeners to take away from your music?

Victor: I just want them to enjoy it. I want them to hear a catalog that offers different sounds, and something that people can connect with.

Pete: Yeah, there’s this phrase in literature – it’s this concept called transport ecstasy. As it sounds, it’s like you’re being taken away, you’re escaping. I like the notion that whether it’s a happy song or a sad song, you will come out of it as the listener with a feeling that the world is going to continue around you, but for this moment, allow us to take you somewhere else. 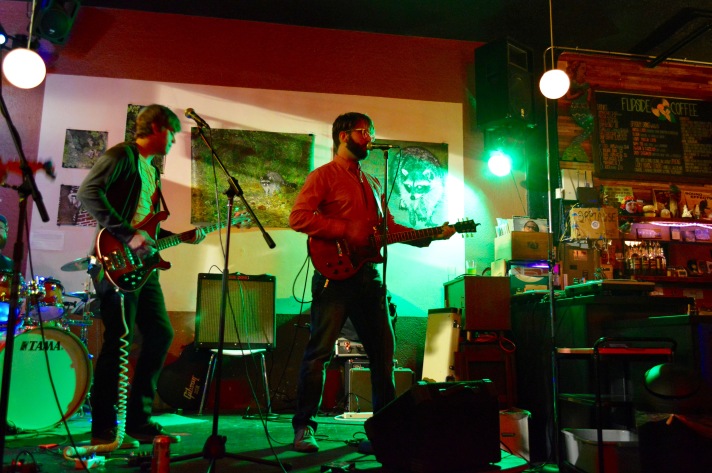 Fir is currently recording a full-length album and preparing for multiple shows. They’re playing on Halloween for the grand opening of the New Cruz Room at 2338 NE Alberta Street in NE Portland. They also just performed on the Rye Room Sessions, and will play at the St. Johns Farmers Market on October 27th. Stay tuned to Coma Collective for Fir’s new releases.