HOLY shit. Monday was my birthday and I got a pretty damn awesome present – tickets to the sold out Tash Sultana show at the Wonder. Although this piece is a review, I won’t hold onto any surprises about my opinion of the show – Tash obliterated the already lofty expectations I held for her. She’s a badass of ultimate proportion.

Getting things started was folk-pop Australian sibling duo the Pierce Brothers. With a stomping, grass-roots sound reminiscent of a less-produced-more-Australian-Mumford & Sons, the twins displayed a lively, engaging mood that was increasingly contagious. While both alternated vocal parts, Pat Pierce relied most heavily on the guitar as Jack Pierce was an all-over-the-room percussionist, drumming on makeshift instruments comprised of the bar area divider railing, the audience floor, and the side of his brother’s acoustic, to name just a few (I think those roles are right, I may have mixed up the names). And of course in classic folky Australian fashion, he did even play the didgeridoo. Despite my initial apprehension to the more novelty aspects of their performance (they were really keen on audience clapping, which I’ve always kind of hated), I was inevitably absorbed into their infectious energy and stage presence. It also helped that they sounded great, and the guitar skills were pretty phenomenal. They owned the room and got everyone excited early.

When Tash came onto the stage, she looked like she was walking into a normal jam session on any other day. She was wearing jeans and a sweater with a beanie barely secured over her signature wavy brown hair. She looked casual, comfortable, and like she was probably pretty stoned. As the crowd cheered, she slung a guitar over her shoulder and around to her back, tweaked some knobs on the keyboard, and began to set the mood. Easing into the keys, she looped a trancey rhythmic track, bending tones like a soothing heartbeat. She grabbed some sticks and started drumming out a bass-heavy backbeat on the drum pads. By the time she sprinkled in a few more effects, she had woven an intricate blusey-psych tapestry around the stage. Then, she pulled the guitar back around.

And that’s when I really lost it. She plays with such passion and conviction that it’s hard not to be completely mesmerized by her motions. Her face shows you that she feels every note, and the way they sound affirms the fact. Anyone who wasn’t already in love with her before the night began would sure as hell be dreaming about her by the end of it. 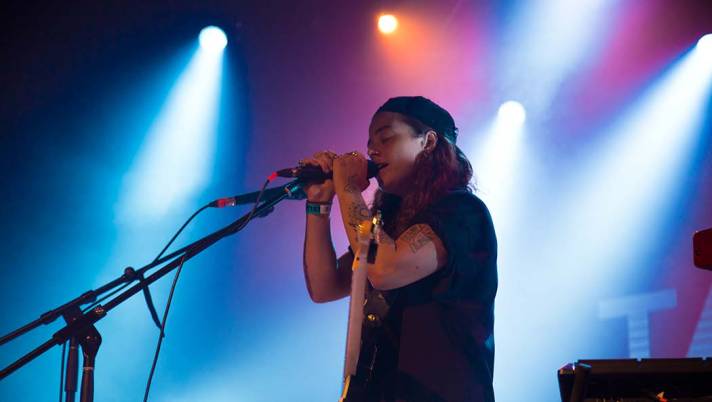 Tash took a break after the first song to make it clear that anyone who was “homophobic, racist, sexist, or xenophobic” could “get the fuck out,” which of course, given her average fan base and the city she was playing in, was met with roaring appreciation. During other breaks she would talk about stories from touring and inspirations in her music. Before entering into yet another (likely improvised) auditory expedition, she spoke about how this piece was influenced by a time that she felt she needed some “healing,” and that her “soul was heavy, [had] a monster in the brain.” This song reminded her, and definitely her adoring audience, that she and we all were “stronger than that.” 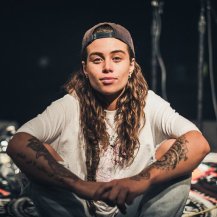 She doesn’t have a lot of recorded material on the internet (a total of 8 songs on Spotify and like 7 remixes of “Jungle”), but that didn’t prove to be a problem in filling the time. Most of the show was comprised of prolonged jam ballads that she would tweak and shift with different musical variations across 8-minute anthems. Her instrumental arsenal seemed completely limitless as she bounced back and forth between mixing boards, keyboards, drumpads, trumpet, the mandolin, the pan flute, guitar (6 and 12 string), and of course her dynamic vocals. Blessed with incredible control and a vocal range that even Julie Andrews would appreciate, she serenaded a captivated crowd with clean breathy whispers, impassioned and raspy howls, and more sounds in between than I knew could be sung. Oh, and she beat-boxed too. (Like holy shit, right?)

The night was a roller coaster of buildups and climaxes, my favorite of which being the journey through the “Jungle.” She closed her pre-encore set with a version of her most notable song that had never been heard in that orchestration, an oratory odyssey of a genuinely singular and unique experience in time. The final coda of the night left me confused with a slew of conflicting emotions – a battle between elation of what I’d just seen and the pain that it was over. But ultimately, I felt eternally grateful that I could be a small part of her life and feel the things she expresses through her art. Tash Sultana painted a live picture that couldn’t be seen or heard anywhere else, and her performance will go down as a memory that I’ll hold onto forever.

Take a trip to the “Jungle” below.